Jenni Is So Excited to Be Visiting Your School! 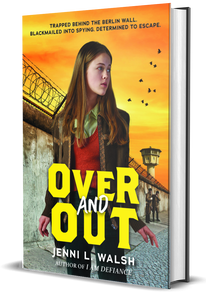 In a lively talk, Jenni will share a behind-the-scenes look at what it's like to be an author, provide writing tips for students to implement within their own writing, and show how words come together to form a book, from first draft to the final version that ends up on shelves.
Order Books for Your Visit
Please click "Add to Cart" to learn more about the book and to select your quantity.

All books will be autographed and can be personalized.
Books will be delivered directly to schools.

Over and Out (Hardcover)

Perfect for fans of Alan Gratz and Jennifer A. Nielsen, a gripping and accessible story of a young girl from Cold War East Berlin who is forced to spy for the secret police... but is determined to escape to freedom.

Sophie has spent her entire life behind the Berlin Wall, guarded by land mines, towers, and attack dogs. A science lover, Sophie dreams of becoming an inventor... but that's unlikely in East Berlin, where the Stasi, the secret police, are always watching.

Though she tries to avoid their notice, when her beloved neighbor is arrested, Sophie is called to her principal's office. There, a young Stasi officer asks Sophie if she'll spy on her neighbor after she is released. Sophie doesn't want to agree, but in reality has no choice: The Stasi threaten to bring her mother, who has a disability from post-polio syndrome, to an institution if Sophie does not comply.

Sophie is backed into a corner, until she finds out, for the first time, that she has family on the other side of the Wall, in the West. This could be what she needs to attempt an escape with her mother to freedom -- if she can invent her way out.

Jenni L. Walsh, author of I Am Defiance, tells a page-turning story of a young girl taking charge of her own destiny, and helping others do the same, in the face of oppression.

I Am Defiance (Hardcover)

Jenni L. Walsh delivers a gripping story about a real-life youth resistance group in World War II Germany, and about the power of thinking for yourself in the fight against hatred.Brigitte tries not to ask questions. They don't seem very welcome at her League of German Girls meetings, where she and her friends learn about their duties to Hitler's war effort.

But she can't help asking questions when a mysterious pamphlet appears in her mailbox: a pamphlet full of words like resistance and freedom, from a group that calls itself the White Rose. Brigitte's father and older sister, Angelika, seem to agree with the forbidden papers -- an opinion that is dangerous even to whisper at home. And when Angelika becomes involved with secret resistance efforts, Brigitte's questions only bloom.

Could Angelika be connected to the White Rose? Is Brigitte's family in danger of being arrested? And if she chooses a side, will Brigitte be able to take a stand?

By the Light of Fireflies (Paperback)


Sybil Ludington believes in the legend of fireflies--they appear when you need them most. But it's not until her family is thrust into the dangers of the Revolutionary War, and into George Washington's spy ring, that Sybil fully experiences firefly magic for herself--guiding her through the darkness, empowering her to figure out who she's supposed to be and how strong she really is--as she delivers her imperative message and warns against a British attack.


BY THE LIGHT OF FIREFLIES is the captivating tale of a young girl's journey as a daughter, a sister, a friend, a spy, and eventually a war hero, completing a midnight ride that cements her place in history as the "female Paul Revere."
Add to Cart

Growing up in Hawaii, Bethany Hamilton loved to surf. But one day, she was in her favorite place, out on the waves, when a tiger shark suddenly attacked. Thirteen-year-old Bethany lost her left arm.As she fought to recover, Bethany wondered: Would she ever surf again?Follow Bethany as she got back on her board and fearlessly chased her surfing dreams. With the strength of her family and faith behind her, Bethany knew she could become not only a professional athlete, but a champion and a role model.This highly accessible and narrative biography includes full-color photos and educational info!

Malala Yousafzai always knew she wanted to become a doctor someday. But a new extremist group in her home country of Pakistan wanted to stop girls from going to school.Malala knew what was important, and so she spoke out. Even after she was attacked on a bus for her views, she persisted.Learn about Malala's incredible recovery and her journey to becoming a world-famous advocate of girls' rights and education -- and the youngest-ever Nobel Prize winner.This highly accessible and narrative biography includes full-color photos and educational info!